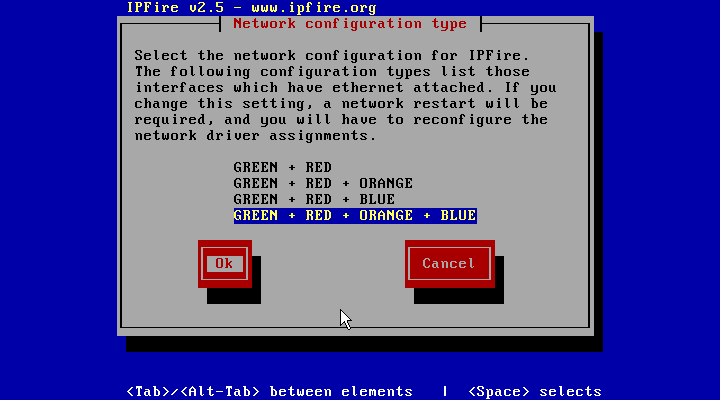 I recently moved from using pfSense to IPFire while still using the same box as my previous setup – which basically meant I had only one ethernet port on my IPFire box, while IPFire supports VLAN capabilities – if you have tried to install IPFire on a similar setup, you would have quickly realized that during installation you can not use VLAN interface and it is mandatory to provide at least a RED and a GREEN interface otherwise the installation does not continue.

In this blog post I cover how I managed through this limitation and completed IPFire installation on a device with single network card. While the steps are very simple, I realized someone trying this for the first time on a similar setup would find it hard and may even give up, it is for benefit of such audience.

There is nothing special that you need to do for this setup until you reach the network configuration menu where you would be prompted to select the network zones that your setup would contain, like shown on the screen below.

If you have just one NIC, the best option here would be to select “GREEN + RED” option. Remember, for more zones you have, the more cards you would need for assignment, since you just have single NIC, you would need a setup which has least number of interfaces, which is “GREEN+RED” in this case.

For the next step, you need to select “Drivers and card assignment” option on the Network configuration menu and assign one physical card to each of GREEN and RED interfaces you selected earlier.

With the only ethernet card being assigned to GREEN, your RED interface is still unassigned. Now here comes the tricky part, if you leave the RED interface “UNSET” and select “Done”, IPFire installation would complain about it and wouldn’t let you continue the installation. You need to provide a card that can be assigned to RED – but your device doesn’t have any otherwise you wouldn’t be reading this! Here is what you can do,

The main idea here is to have at least some kind of network card assignment on RED so that the installation can continue, later on once we have VLAN configured, this can be undone.

Continue with the installation

Once you have assigned network card to RED and GREEN, you can continue with rest of the installation. Make sure you enable DHCP server on GREEN from Address settings menu.

Once the installation is completed, the IPFire GUI interface would be reachable via GREEN. Connect a patch ethernet cable to your IPFire device’s only ethernet port and connect the other hand to your computer or “WAN” port of your WiFi router. After this, you should be able to access IPFire web interface at port 444 of your gateway.

In the IPFire web GUI, head out to Network -> Zone Configuration, it may look something like this,

Assuming you will connect VLAN trunk cable on eth0 (which is currently directly connected to your computer) – set any other interface other than “eth0” as “-None-” and for eth0 – in both GREEN and RED – select VLAN option and specify a VLAN tag, like shown in the below screenshot where I have configured eth0.10 for RED and eth0.20 for GREEN