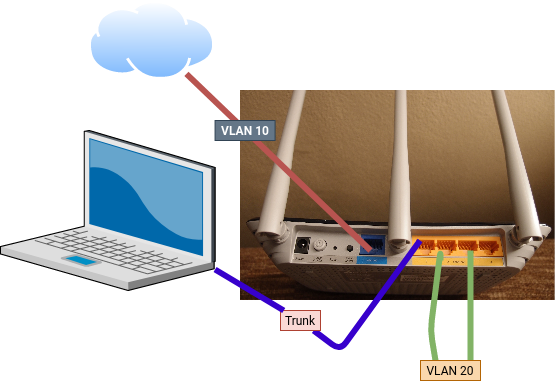 I really wanted to try out pfSense; while I had lots of ARM based single-board computers such as Raspberry Pi, Rock Pi E lying around – I did not have a spare x86 machine to host pfSense on – as pfSense does not support ARM CPU (yet).

I had an old laptop that I could use to install pfSense on, but as is case with any laptop – the laptop only had single network interface. That meant that I could only connect my “internet”/WAN cable coming from my ISP, I had no second port to connect my WiFi router for wireless access. One may argue that I could use laptop’s wireless card for WiFi access – but anyone who has tried running hostapd on FreeBSD knows that you could barely go beyond a few Mbps of speed.

One popular, and obvious, solution for single NIC pfSense box design involves using an external switch to “expand” number of available ethernet ports. Now I did not have a managed switch lying around, but I had a WiFi router. WiFi routers typically have one WAN/”internet” port and 4 LAN ports – is there a way I could utilize my cheap WiFi Router as managed switch ? Turns out I can!

if your home WiFi router has more than one port, it most likely supports VLAN capability and can be used as a managed switch

Some of this will become more obvious as you follow through my steps.

Setup VLAN on the WiFi router

Assuming you have OpenWrt flashed on your WiFi router, the first thing that you would do is remove WAN interfaces from the router and setup VLAN tags for the LAN and WAN ports.

Removing WAN interfaces here because once ready, your WiFi router will no longer act as a “router” but just as a Wireless Access Point and WAN/internet interface configuration would be handled from within pfSense.

With this, we are ready to connect the router to our pfSense device via the LAN1 trunk port.

While we are not done yet, the steps performed till now are sufficient for pfSense to recognize VLAN tags and for us to create WAN and LAN interfaces on pfSense. The following steps to connect the trunk and setup pfSense interfaces assumes that you have a clean/untouched installation of pfSense on your laptop (or the x86 box that you are using for this purpose).

We have now assigned our VLANs inside pfSense for WAN and LAN network. We have also enabled DHCP on the LAN network. Now we need to make few final changes in the WiFi router before pfSense takes command of the network.

Till now we have been referring the WiFi router as, well, “router” – but with the pfSense setup, the actual “routing” is being done by pfSense! Even the allocation of IP happens through pfSense. The WiFi “router” merely acts as managed switch + Wireless Access Point combo – so we need to take away any of the “router” related roles from our WiFi router.

That’s it! You have converted your WiFi Router to a wireless access point and pfSense is handling all the clients connected to the AP! Head over to https://10.6.9.1 – you should see pfSense login page. Now proceed to setup your single NIC pfSense with wireless capability!